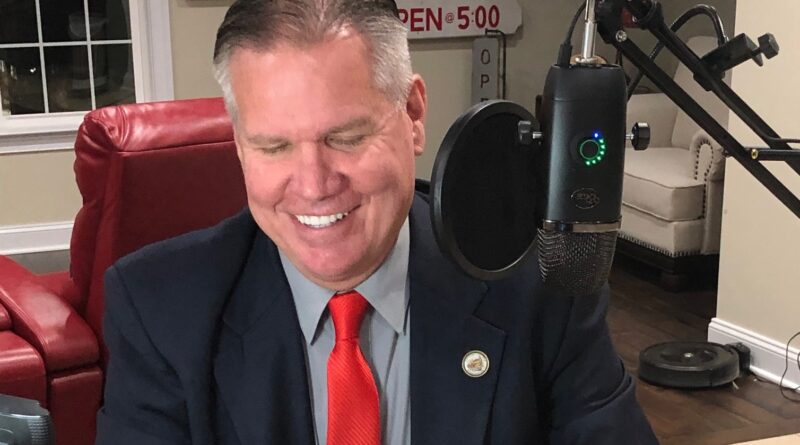 Major Steven R. Jones began his career with the Calvert County Sheriff’s Office over three decades ago. Like many Calvert County residents, he was motivated by a desire to assist others and to see that his home county stayed the kind of place families would want to grow and flourish and could. Starting out as a deputy was just the first step in a long and storied career that has yet to end and now leads him to pursue further service as a County Commissioner.

In June of 1989 Steve joined the Sheriff’s office and began serving the county as a deputy. Little did he know at that time the path that lay before him. Like many he sought to be promoted through hard work and motivation. He was successful in that endeavor but with the promotions came training and responsibility that led him into leadership positions. Those positions held unique responsibilities and the training requirements grew further.

In 2003 Steve was promoted to Sergeant and while serving as a supervisor in the Patrol Division he also shouldered the burden of being the agency’s Lead Firearms Instructor. At that point he became responsible for insuring that every deputy in the Sheriff’s Office met the state’s minimum requirements for firearms training and use. In 2004, adding to those duties, he was appointed as the Sheriff’s Homeland Security Assistant, and became responsible for all counterterrorism response in the county. He was directly tasked with insuring that Calvert County’s critical infrastructure was protected and secure. He was also the Deputy Commander of the County’s quickly growing Special Operations Team. All of those duties meshed together and required a high level of skill for time, team and resource management. Already familiar with the various county agencies, it was at this point that Steve had to begin working directly with many of them, coordinating efforts and insuring that nothing was missed. He was not only working with county agencies but coordinating with state and federal agencies where Homeland Security was concerned as well.

In 2008 Steve was promoted to Lieutenant and placed in command of the Sheriff’s Criminal Investigation Division. As such he supervised every major criminal investigation in the county and his four-year tenure resulted in a 20% decrease in overall crime rate. The division, under his supervision, enjoyed one of the highest case closure rates in the state. His coordinated efforts with state and federal agencies continued and he continued to serve both as the agency’s senior firearms instructor and as deputy commander of the Special Operations Team. Steve was showing just how much responsibility he could manage and how well he could manage it.

Beginning in 2008 his ability to efficiently multi-task really began to show as he took on the position of Multi-Agency Neighborhood Watch Program Facilitator. With that position his responsibilities began to expand past the borders of the county. He had clearly demonstrated his ability to be analytical, determined and purposeful in his actions. He had demonstrated clear thinking, even in crisis situations and his leadership was recognized. In 2010 he became a Calvert County United Way Board Member and was also appointed to the Calvert County Commissioner Employee Recognition Committee. Any county board or office he wasn’t previously intimately familiar with, he was exposed to at that point. In 2011 he was also appointed to the Calvert County Commissioner Retirement Board. Furthering his service to the county beyond his direct duties and the boards he served on, Steve actively organized and participated in events supporting The Special Olympics.

The next few years showed an accelerated operational tempo for Steve. In 2014 he was promoted to Captain and less than a year later he was made Commander of the Special Operations Team. As such he was instrumental in the creation of a unique document. Steve co-authored a Memorandum of Understanding (MOU) with the United States Coast Guard, regarding enforcement of Federal exclusionary zone at the Cove Point Liquid Natural Gas Terminal, and the Calvert Cliff’s Nuclear Power Station. This MOU was the first of its kind in the nation, helping to ensure the safety and security of the citizens of Calvert County and surrounding jurisdictions both on land and water. This MOU has been replicated across America helping our nation secure energy independence while protecting the homeland from terrorist attack.

In 2016 Captain Jones was among a problem-solving group to attack the opioid crisis. The “Sheriff’s Outreach for Loved ones In Distress” was formed. (S.O.L.I.D.) This program is run by the Sheriff’s Office Special Operation Team (S.O.T) and targets families who’s loved ones have overdosed.  S.O.T. provides resources and training to these families discretely in hopes of excepting the training and to keep their loved ones alive. Approximately 200 families have been trained and we consider one life saved a success.

In 2016 Steve was Appointed by the Board of County Commissioners, the Planning Commission that serves as a citizen review board on county planning decisions, Reviews and makes recommendations to the Board of County Commissioners on the Comprehensive Plan, town center master plans and other policy plans necessary to guide county development. In addition, the Planning Commission ensures that all rules, regulations and County Policies are followed. Steve was elected as the Chair by his Board peers in March of 2020. Although often Planning Commission Decisions are controversial, Steve has stood by his word with transparency, honesty and commitment to doing what he believes is in the best interest of all of the citizens of Calvert County.

In 2019 Steve was promoted to Major and currently serves as third-in-command with the Calvert County Sheriff’s Office. He is directly responsible for overseeing all high-risk operations and the security of the above-mentioned facilities which are unique to Calvert County. His tenure with the Sheriff’s Office has provided him the necessary exposure to county-wide challenges and the experience of working with all agencies and departments within County government.

In June of 2020 Steve was appointed to the Calvert County License Commissioners by Governor Larry Hogan. The Board of License Commissioners, commonly referred to as the Liquor Board, is responsible for regulating and controlling the sale and distribution of alcoholic beverages within the county and administering and enforcing the provisions of the laws of the State of Maryland and the rules and regulations

That is the background and experience he brings in his bid to become a County Commissioner, continuing to serve the best interests of the citizens and businesses in Calvert County.

2 thoughts on “The Steve Jones You May Not Know… YET”